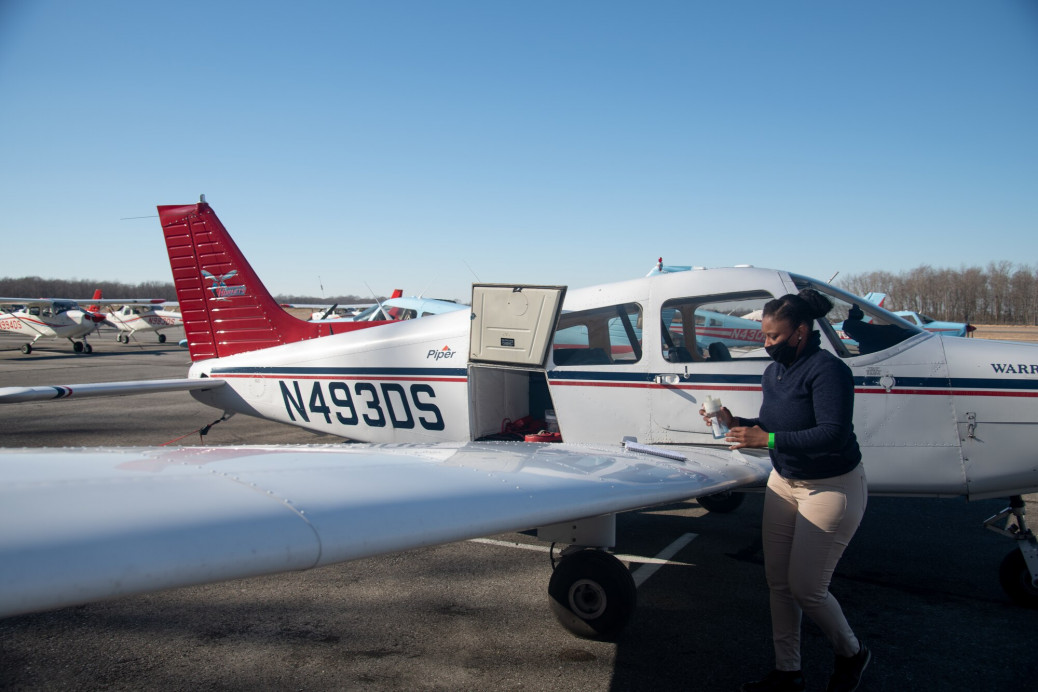 DOVER AIR FORCE BASE, Del. —  Chaplain (Capt.) Meagan Davis, 512th Airlift Wing, flew a Piper Warrior aircraft for the first time in April 2019 during a discovery flight over the skies of Dover, Delaware.

A discovery flight familiarizes individuals with an airplane and the flying environment and determines if the individual desires to begin flying lessons.

“I was sitting in the plane with my instructor preparing for takeoff, and I knew there was no going back,” said Davis, as she reflected on that first flight.

Davis, who has 15 years of reserve and active-duty Air Force experience, said after her instructor guided her on how to make a few turns of the plane, she was struck with awe at the feeling of flying.

Davis said that moment convinced her to pursue her private pilot’s license.

“I remember having so much fun and feeling like I had to learn to fly.”

The reservist, who commutes from New York to Dover Air Force Base, Delaware, is currently attending Delaware State University, where she’s pursuing a bachelor’s degree in aviation with a concentration in professional piloting.

Upon completion of the three-stage program, Davis said she will receive her PPL.

She explained if it weren’t for her mentor, Maj. William “CJ” Charlton, an Air Reserve Component C-130 pilot and commercial airline pilot, she would’ve never applied to DSU’s aviation program.

“I met Charlton at an Aviation Character and Education Flight Program training session in 2018,” said Davis.

The ACE Flight Program was a joint effort between the AF and DSU that provided students initial flight training in civilian aircraft to encourage interest in aviation careers.

Davis, who began her military career as an aircraft electrical and environmental systems specialist, said Charlton immediately encouraged her to fly, after he discovered she was a mechanic prior to becoming a chaplain.

She said he asked the question that changed her life: “Have you ever thought about flying?”

“I can be really honest with myself and say I would have never gone after it,” she added. “It wasn’t because I didn’t think I could do it. I just couldn’t see it — but Charlton did.”

The reservist, who’s been a Liberty Wing chaplain since 2018, said she has relied on her faith and determination to overcome several obstacles in the pursuit of her PPL.

She said she began her pilot training a semester later than she was originally scheduled to; and, when she got cleared to fly her first solo, her instructor told her they were grounded because of the COVID-19 pandemic.

Davis said she felt the halt in her training possibly meant losing the piloting skills she had attained.

“Flying is a depreciating skill,” she said. “If you don’t do it, you’ll lose your skill set.”

The New Yorker credits her upbringing for helping her through the ups and downs of her pilot training.

“I learned early on to turn nothing into something,” said Davis. “When I experience things that are difficult, I take the time to think about what I’m supposed to be learning and how I can thrive in the situation.”

She added she’s not a stranger to adversity and feels her past experiences have shaped her fortitude.

These experiences include graduating from Basic Military Training after six months due to a medical hold and grieving her uncle’s passing while at BMT.

“My uncle was the male figure in my life,” said Davis. “He was very instrumental in my growth and development.”

She said her uncle Nathaniel Davis, Jr., a Marine and Vietnam veteran, taught her to be tough and to conquer adversities.

“Just because you go for a goal, that doesn’t mean it’s going to be easy,” said Davis. “You have to be hungry. You have to want this thing more than your worst experiences while going for it.”

Patience with yourself when you’re going after something is super important, she added.

As an African American woman, Davis said she has also faced the hardships of existing as a double minority in the military and completing a three-year process to become a chaplain.

“People always ask how I went from being a maintainer to a chaplain,” said Davis, who is a self-proclaimed preacher’s kid whose held many roles in her church.

Nicknamed “Rev” and “Preach” at BMT, she said she has always loved helping people and being a safe space for others.

Her supervisor, Chaplain (Lt Col.) Gregory Ellis, the 512th Airlift Wing chaplain, said Davis’ experience as a maintainer is beneficial, because she understands the culture of the job and is able to relate to maintainers in a personal way.

“She’s a shining star who is proactive and courageous,” said Ellis. “She is fearless, not to mention strong and persistent. I think flying is a wonderful opportunity for her to excel.”

“That moment was worth everything,” she said. “All the studying, the discouraging obstacles – everything culminated in that moment.

“I didn’t know I would love to fly. Charlton awakened the passion in me, and I will be forever grateful to him for that.”

She emphasized the importance of having supporters like Charlton and added it’s your supporters who typically see more in you than you see in yourself.

“Your circle is so important,” she said. “You want to surround yourself with people who are not just dreamers but those who go after them.”

Davis attributed her invincible spirit to her mother and grandmother and said they taught her to always try.

“My family taught me to never accept when people told me I couldn’t do something,” she said.

Davis jokingly compared her application to DSU’s aviation program to her accepting the job as a military mechanic.

“When I took the (Armed Services Vocational Aptitude Battery test), I did well on the mechanics section,” said Davis. “That surprised me, because up until that point, all I had done was screw in a light bulb, and then, there I was, about to learn how to fly a plane, when all I had done before was work on them.”

Davis said she has a newfound appreciation for the diligence and commitment that encompasses the aviation profession.

“The pilots, aircrew, air traffic controllers, ground crew — there’s so much that goes into getting a plane off the ground,” she said.

Davis described flying as beautiful and said her journey to becoming a pilot is an example of taking risks to discover the unknown.

“Let your passion fuel you,” she said. “I’d rather try something and fail than be taunted by ‘what if.’ If you don’t go for what you want, you will have nothing but dreams and wishes.”

The chaplain said flying has further ignited her love of helping people.

She created Women Rock Wings, a social network platform for women in aviation.

“I get to speak to women who are going after their goals,” she said. “I get to encourage them, and they encourage me; and, we learn from each other.”

She said she recently started an aviation grant for women with the intention of awarding two grants twice a year, one for a female pilot and the other for a female in another component of the aviation industry.

Davis said she will soon complete her stage one check, one of three checks that assesses her flying progress, and plans to complete private pilot training in April.

Since beginning her training nearly two years ago, Davis said she has been asked if she plans to fly for the AF.

“I haven’t decided whether I’d like to fly cargo, commercial or corporate aircraft,” she said. “What I do with my PPL is to be determined. If I want to do more than just fly recreationally, I’d have to complete additional training.”

For now, she’ll be preparing for her stage checks and focusing on WRW.

“Flying and expanding the footprint of women in aviation — that’s my goal right now,” she said.

Leave a reply Click here to cancel the reply