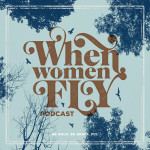 What if the Future of Flight is Female? Meagan Davis – Creator of Women Rock Wings

In today’s episode, Sylvia is joined by Meagan Davis, Air Force Chaplain, entrepreneur, aviatrix, mentor and creator of Women Rock Wings.  Meagan shares her story from early influences growing in Brooklyn to being called to chaplaincy and learning to fly. They discuss the power of faith, her belief that women were born to soar, and the transformative influence of community.

During the month of March, Women’s History Month, we lean into the power of community by affirming each other’s knowledge and credibility, perhaps what we collectively need most. Meagan is changing the narrative of all women by elevating the voices and using her platform to highlight an adage, “The Future of Flight is Female”, an assertion to continue progressing together in all fields.

Leave a reply Click here to cancel the reply